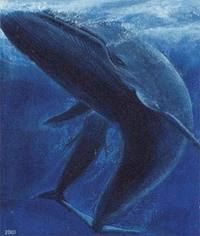 Renata and her mom, the big blue whale, were playing along the coastline of the ocean that kisses Argentina's Patagonia.

They swam together, they fanned the waters with their tails, they dove to the bottom of the ocean, then swam to the top. They inhaled some fresh air and, whoosh! Back to the deep they went. Each time they dove, they took in salty water and later, fffxxx! It was exhaled through the blowholes on the back of their heads.

"Very good, Renata," her mother said, "you deserve ten for that nice demonstration!" Renata was a newborn and an excellent specimen of a blue whale calf. She liked to play, jump, make ringlets in the water and swim.

After all the gymnastics, Renata would be hungry, so she would swim to her mother's side and push her tongue against the nipple to drink the thick creamy milk that would squirt into her mouth. The blue whale calf was happily growing up with enjoyable exercises and delicious milk.

One day Renata was still hungry and whispered in her mother's ear:

"Mom, when will I be able to have something more solid than milk?"
"You're right, dear, it's time for you to eat more than milk... but it's a long way to where there's good food," said the mother.
"Oh, I love traveling, where are we going?"
"We shall go to the Antarctic continent. It's far and cold, but there we'll find krill."
"What is krill?" Renata wanted to know.
"It's a delicacy for whales" answered her mom with a wink, "shall we go?"

And with that thought in mind, Renata and her mom started the long trek south.
They swam for days and days. They said hello to penguins, waved to albatrosses and tube‑nosed petrels. They met a family of dark Southern right whales: a male accompanied by a female and two baby whales.

And so they did, the adult whales leading the way and the little ones swimming behind, playing and exploring every corner of the bottom of the ocean. A while later, the super‑hearing ear of one of the whales picked up a strange noise.

"Danger! Dive!" said the whale, and in a jiffy there was not a whale to be seen on the surface of the ocean while the silhouette of a fishing boat slowly appeared on the horizon.

The male Southern right whale waited a while, then lifted half of his huge body out of the water to spy and smell the danger. And the men in the fishing boat saw him

"Prepare the harpoons!" yelled one of the humans.
"Aim crossbows. Be ready with the nets," added the captain.

The blue whale dove to join the other whales and the calves and stayed clustered at the bottom of the ocean. They were terrified. Then the gigantic male, angry and anxious to protect the young, rose through the waters like a torpedo up towards the sky.

He opened his big mouth and swallowed the boat.

The whale kept the boat in his belly a few seconds and then began to gargle loud gargles.

Men, harpoons, nets, crossbows and all that was on board shook tremendously and spilled over the waves.

And kept on gargling, adding, "'Aaaaagffff‑veda' means it is not allowed to hunt us, Grrrhhh, grrhhh" and gurgled again.

Ten minutes passed. The men were shattered with pain and fear.

Then the male, believing that the punishment had been sufficient, threw the boat out of his belly and went to the depths to join the other whales.

The group started the journey towards the white continent, but, first, curious as they were, they looked back.

The bad men, with life vests on, were floating in the water struggling to climb on board the fishing boat.

Now, finally, it was time to move south searching for krill for Renata and her friends.